Paper by
Gacheke Gachihi
Social Justice Activist  and Blogger.
Members of Bunge La Mwananchi.
ggacheke@gmail.com
ABSTRACT
Bunge La Mwananchi social movement emerge as critical grassroots social force   in the framing and setting agenda for the national debate in kenya   as organic social movements in historic moment of our time when Kenya is in the terrain of creating new democratic state with the new constitutional   framework that promises hope for social change and  democratic liberation, from neo-colonial state order, the  struggle for many years from other social movements that have shape struggle of social justice in  kenya  and Africa.
The article discusses the growth of Bunge La Mwananchi Social Movement from the seeds of the earlier resistance of social movements in Kenya that shaped the struggle for social change in Kenya since the occupation of British Imperial Company in the East Africa in the year 1884, and Subsequent resistance by Africa people, against domination and occupation by colonial settlers that were advancing capitalist-Imperialist interests in Africa.
The article examine the origin and evolution of Bunge La Mwananchi as organic social movement during the   era of neo-liberal globalization, it also examine the   social base of the movement and its collective action that shapes the movement.
The Writer who is a member Bunge la Mwananchi  discuss his experience and  the movement  relation with  human rights  and political parties   that are in play in the Kenya political and economic social sphere in the process of building the Bunge La Mwananchi as nationwide social   movement to bring social transformation and  build democratic state in  Kenya. 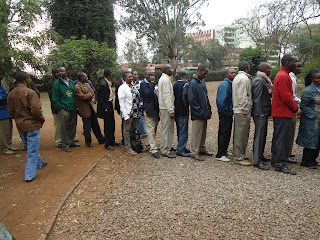 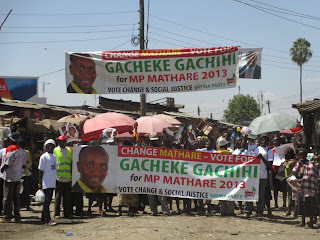 The question of social justice in Kenya 2013 Election.

The Bunge La Mwananchi political and power  discourse is shaped by collective action in form of  campaign as  in the    2004 this campaigns  related to Kenya police wages  and  housing where the members of the movement debated the issue of the police welfare and  participated extensively   in Governance and Justice and Law order sector reform (GJLOS) debates and  forums  to influence the polices of the program in support of the police reforms , and distributing the education materials citizens and this also included  organizing a demonstration in 2003 to  create awareness and  agitate for provision of better housing and an increment of the wages for police officers who were earning a partly 3000 kenya shillings (about $50) per month also another camping was about access to justice dubbed Ole sisina campaign  at Kencom bus stage in protest of the  extra judicial killings by kenya police  and decision by the Attorney General Amos Wako  not to charge a rich farmer who had killed a poor KWS officer in cold blood, with impunity the campaign was for access to justice and accountability against impunity a campaign that  moved members to join with other civil social  organization and formed a platform called Kenya Against Impunity( KAI)…( read the KAI minutes and the TJRC case )


The movement in the same and  also organized a political education campaign in 2004-2005 -2006 around Kencom  bus stage in the name of  Hema la katiba, within the city centre, the campaign objective was  to mobilize and  create a critical mass in advancing the right to organize, participatory  constitutional process ,political accountability, misuse of public funds  by the government and  state  buying fuel guzzlers cars to  a bloated  cabinet ministers , that was burden to Kenya taxpayers, this campaign  was very successful  that Kenya National Commission on Human rights(KNCHR) under its chairman Maina Kiai offered to partner with Bunge La mwananchi in distribution of human rights education material and conducting political accountability  forums and campaign that initiated formation for movement for political accountability (MOPA) in run-up to the  general election  2007, the movement continue to educate and raise awareness in the country on matters of political accountability  under the coalition government  with members of the movement participating occasionally in holding the accountability forums in their respective area at  county forums.

4.   Conclusion  new constitutional dispensation and challenge  of the social movement in future. 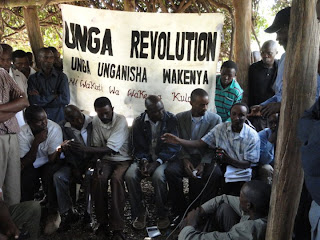